A renewed impetus for open research in Australia 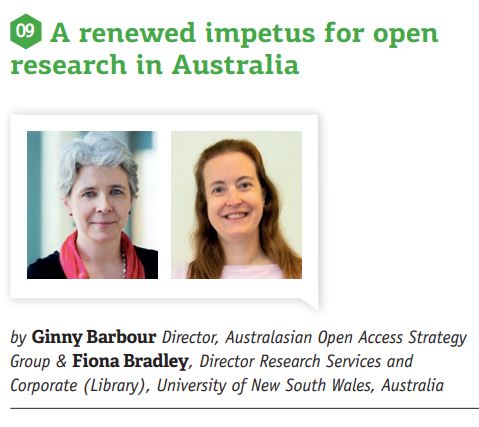 This article has been reproduced in full from the Horizons IUA Magazine Vol. 26 N°2 May 2021 www.iau-aiu.net

Australia may be on the cusp of a new era in open research.   On 17 March 2021, in her first major speech as Australia’s new Chief Scientist, Dr Cathy Foley, stated that: “Access to information is the great enabler for innovation”. Australia has a long history of engagement and innovation in open access and open science but two recent crises affecting Australia, the 2019/20 bushfires and the COVID-19 pandemic, have increased interest in open science considerably.

Open initiatives in Australia can be traced back to 2000 with the university repository at the Australian National University (ANU) followed in 2003 by the founding of open publisher ANU press, and the world’s first policy on open access (OA) via a university repository at Queensland University of Technology (QUT). Since that time a variety of actors have engaged in the open science debate, ranging from government initiatives to support repositories at all Australian universities in the mid-2000s, through to federally funded infrastructure to make data FAIR (Findable, Accessible, Interoperable, Reusable) via the Australian Research Data Commons. In the past few years advocacy has accelerated with concerted efforts via the Australasian Open Access Strategy Group (AOASG) and the Council of Australian University Librarians. Despite these efforts, in 2018 just 32% of Australian research reported for the national Excellence in Research Australia exercise was open. While the proportion of OA has undoubtedly increased year on year Australia lags behind comparable countries based on research output such as the Netherlands or the UK and lags further when compared with low and middle income countries. But why? To a large extent this low proportion reflects a lack of coordinated national leadership on open science and OA.

Policies on OA to publications such as those in place from 2013 from Australia’s two primary government research funders are clearly not enough on their own to drive change without being backed by rigorous compliance mechanisms, infrastructure, and funding. What is needed now is a holistic approach that includes infrastructure support for the entire research dissemination system – ensuring that innovations and services at institutional or national level, be it book or journal publishing, institutional repository content, or datasets are interoperable and sustainable. Finally, and critically, research practices from the ground up and incentives need to go beyond research excellence to foster a change in culture.

The benefits of an open science approach both for how research is done and how it is communicated to policymakers, industry, and the public are clear, as Dr Foley’s recent comments show. The COVID-19 pandemic provided impetus for discussions around OA and open science in Australia and internationally. In 2020 Australia’s then Chief Scientist, Dr Alan Finkel was one of the group of high level leaders calling for open sharing of research during the pandemic. Coming on the back of ongoing work such as the draft open science recommendations from UNESCO, and the declaration in support of open science from Asia-Pacific Economic Cooperation (APEC), it seems that the role of open science in addressing international emergencies is now fully recognised by a growing number of intergovernmental agencies and governments. But while emergencies are often a catalyst, they cannot be the sole rationale and time when research is made openly available to everyone.

There is now potential for a national approach to open science in Australia. However, Australian research and funding has some specific characteristics that mean that approaches in Europe or North America are not always easy to adapt. Furthermore, respecting Indigenous knowledge practices are essential. Protocols and practices for culturally appropriate publishing and data sharing are not yet widely adopted by publishers and infrastructure, although there is work in this area such as the CARE principles for Indigenous Data Governance and a thirst for engagement as shown at a 2020 OA week panel hosted by Australasian Open Access Strategy Group (AOASG). There is also more work to do to ensure that research on emerging, or regionally specific issues such as certain tropical diseases, Australian legal research, or work aimed at medical practitioners in regional and remote parts of the country is available and discoverable.

So how do we take open science forward at national and international levels? We recognise and welcome that change comes from many directions – from national governments, institutions, funders, intergovernmental agencies such as UNESCO but also individual researchers and participants in research themselves. Ultimately, though, universities must take the role as key drivers as well as final beneficiaries of more open science – since practices that drive open science will also support better reproducibility, robust translation and public trust in their research.