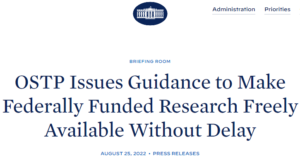 Open Access Australasia welcomes last week’s guidance from the US White House Office of Science and Technology Policy (OSTP)  on public access to research. The guidance, detailed in a memorandum to all Federal agencies that publish research, requires them to put in place, by the end of 2025, policies and processes whereby all the research they fund, and associated data, will be made immediately and freely available for all.

Despite the huge advances in diverse open access models over the past 20 years, there is no doubt that policy changes such as this are the most effective way to drive progress towards full open access. This is clearly shown by the changes to publishing models resulting from the 2013 Research Councils UK and 2014 Higher Education Funding Council for England (HEFCE) policies, the effect of the cOAlition S immediate open access policy, which commenced in 2021 and the leadership shown by the Open Research Funders Group of US philanthropic funders. Given the large number of funders who have immediate open access policies, who together fund enormous amounts of public research — €33bn yearly via cOAlition S funders and US$85 billion yearly for US Federal research—further change globally seems to be inevitable.

As has been recognised by the HEFCE policy, cOAlition S, and as articulated by the Confederation of Open Access Repositories (COAR), it will be important that the new policies and guidance include a diversity of approaches to open access. cOAlition S and Science Europe are coordinating work on free to read and free to publish (diamond) open access journals and also recently stated their support for open access publications that have been peer reviewed outside of traditional journal models.

Kim Tairi, Chair of Open Access Australasia (OAA) Executive Committee, commented:
“As Chair of OAA and a member of both CAUL (Council of Australian University Librarians) and CONZUL (Council of NZ University Librarians) I am hopeful that the US Public Access policy will spur on our own governments, funders, research institutes and universities to more fully embrace a future that is open. It would be terrific if our governments followed suit with policies and processes that make publicly funded research immediately open. It feels like the hard work open access advocates are doing globally is starting to make the change we have been waiting for, and open science needs.

Our experience with the high quality open access publications in Aotearoa New Zealand is that we can use them to share diverse voices and indigenous research that are often marginalised in traditional publishing. This guidance gives me hope and I am grateful to all of you who are contributing to this work and playing a part.”

We hope that this US policy guidance will strengthen the impetus for Open Access in Australia and Aotearoa New Zealand.